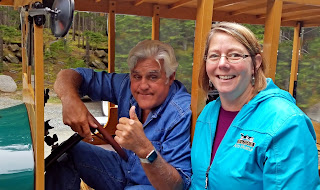 On a foggy day at the beginning of August, Jay Leno flew into Bar Harbor for a shoot of his show Jay Leno’s Garage at Martha Stewart’s summer home, Skylands, in Seal Harbor. Skylands was originally built by Edsel Ford, the son of Henry Ford, the founder of the Ford Motor Car Company. Martha Stewart invited the Seal Cove Auto Museum to be a part of the show, which will focus on Edsel Ford and his role in the development of the Model A, and his summer retreat in Maine. Jay Leno wanted to drive the museum's 1928 Ford Model A Huckster - donated by Binky MacQuinn in honor of her husband, Ronald MacQuinn - in the shoot, which also featured Martha’s 1957 Edsel wagon.

Director Raney Bench and volunteer mechanic Harry Saunders brought the Huckster to Seal Harbor, and spent the day at Skylands with Stewart and Leno, providing Leno with the interesting details about the Huckster that he discussed in the filming of the show. This episode of Jay Leno's Garage will air in the spring of 2019!

The Seal Cove Auto Museum fosters joyful experiences for people of all ages and interests, by telling the story of innovation and ingenuity in New England and America through the early development of the automobile. The museum is open May 1 – Oct 31, and open in the winter by appointment. For more information please contact the museum at 207- 244-9242 or info@sealcoveautomuseum.org. 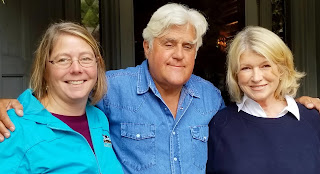 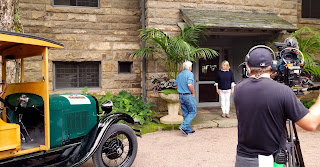 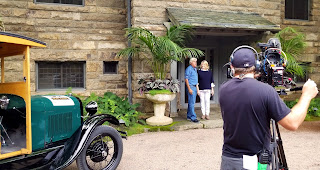 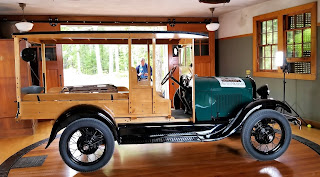 Posted by Chamber Office at 2:32 PM