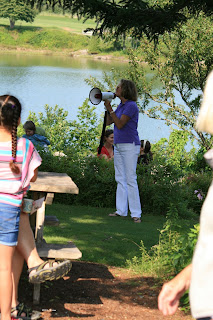 The Southwest Harbor & Tremont Chamber of Commerce is pleased to announce that Ann Judd is the 2015 recipient of our annual Citizen of the Year Award, which will be presented again this year at the Quietside Flamingo Festival's Polo and Yacht Club Cocktail Party to be held on Sunday, July 19th from 5-7:30pm.

Ann Judd lives with her husband Lee in Southwest Harbor and Spring Island, South Carolina during the winter months. Ann is a former volunteer teacher of music, French, and environmental education to Pemetic elementary students (1991-2007), and has served on the Southwest Harbor Conservation for over 20 years previously as Chair and presently Secretary, and chairs its Beautification Committee. During her time as Conservation Commission Chair she initiated the New Century Tree Planting Program, planting about 50 shade and ornamental trees in downtown Southwest Harbor and along its main streets. She also directed the renovation of the downtown Veterans Park, getting federal grants and many local contributions so that it could be ready in time for Southwest Harbor’s 100 year celebration in 2005 complete with a beautiful Veterans honor wall.

She is an Approved Horticulture Judge for the Garden Club of America and is active in clubs in Maine and Georgia. Ann is the Co-Chair of the Advisory Committee for the Thuya Gardens and is a board member of the Land and Garden Preserve (which oversees the Thuya and Asticou Azalea Garden, Northeast Harbor).

She is a South Carolina Master Naturalist and a Maine Master Gardener. In 1998, with the help of Pemetic Students, Master Gardeners and local volunteers, Ann established the Butterfly Garden at the Charlotte Rhoades Park in Southwest Harbor. Each summer, she directs volunteers and instructs classes in organic habitat gardening at the Rhoades Park and from June to October supervises a Monarch Butterfly Waystation Project for the local community.

When you see Ann, please thank her for her years of service and join us on July 19th at the Causeway Club for the Polo and Yacht Club Cocktail Party to help us publicly honor her contributions.

For more information on joining the party at the Causeway Club on the 19th, contact Harbor House at: 244-3713 or Diana@harborhousemdi.org.

Posted by Chamber Office at 2:43 PM